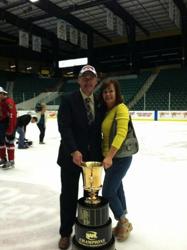 Harry currently consults athletes, coaches and teams in the area of Mental Skills Training and is a Professional Player Rep. with Titan Sports.

Harry was a professional coach for twenty-five years, from 1995 – 2019. Coaching in Division 1 Germany, WHL, USHL, NAHL and the WSHL. Winning 9 championships, 2 National Championship titles and graduating hundreds of players on to NCAA and Professional hockey.

Harry played hockey in the BCHL, WHL and signed as a free agent with the Calgary Flames in 1982. Harry played college hockey at the University of Manitoba (1983-87) and finished his playing career in Germany.

Harry is a graduate of the University of Manitoba (1987) with a Bachelor of Recreation and Sports Management and studied at CalSouthern University, Master of Science (Applied Sport Psychology).

Harry his wife Sarah have five children and currently live in NYC. Sarah is a Premium Customer Service Regional Manager for Newark, Raleigh-Durham and St. Louis for American Airlines. 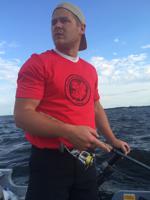 Jamie quickly transitioned from playing to coaching by leading the Fort Frances Bantam program for two seasons. A regional Bantam All Star Program 2012-13. In  2013-14, Jamie accpeted the Head Coaching Position with the Fort Frances Muskies Varisty High School Hockey Team. Jamie led his HS team to back to back (2013-14 & 2014-15) league and regional championships. The Muskies advanced to the All Ontario HS playdowns in 2014, 2015 & 2016. At the 2014 the All Ontario HS play down, Jamie led the Muskie's, to a birth in the quarter finals. It was the first time in 10 seasons, the Muskies' had advanced from the All Ontario pool play to the quarter finals.

After three successful years of building the Muskie's HS program, Jamie led the program in 2016 to an All Ontario HS Hockey Championship. A remarkable accomplishment by a special group of players and coaches.

Jamie is an advance certified coach through Hockey Canada  and a well known and respected player development coach throughout NW Ontario.

Austin has an extensive playing background starring in the BCHL before moving on to NCAA Division 1 Minnesota State University. After college Austin moved on to have a very successful Professional career in the CHL that saw him honored as the 2009 CHL Man of the Year. The award is presented annually to the Central Hockey League player adjudged to have best exemplified strong leadership qualities on and off the ice, while making significant and noteworthy humanitarian contributions to his community."